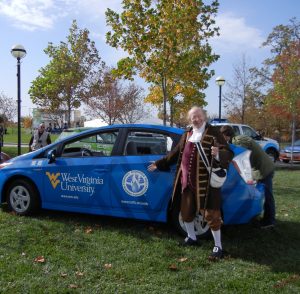 If your business or organization is interested in hosting an Odyssey 2017 event, complete the online hosting form.

Participating Odyssey site hosts agree to hold an alternative fuel vehicle (AFV) event on or around April 20,, 2017, include Odyssey branding, and submit a list of post-event details to the NAFTC. In return, the Odyssey Team supports event hosts through marketing and promotional materials, informational handouts, and planning assistance.

The Odyssey Team goal is to recruit a minimum of 100 event hosts for the 2017 event.

Ronald Flowers of the Greater Washington Region Clean Cities Coalition (GWRCCC) was the first site coordinator to sign up. GWRCC hosted the national kickoff event in 2014.

The NAFTC would like to recognize Mr. Flowers for his service to the Clean Cities Coalitions. He will retire in January of next year.

The national kickoff event helps to focus national media attention on Odyssey and the participating sites.

The 2014 event was held on the national mall. U.S. Deputy Assistant Secretary for Transportation Reuben Sarkar served as the Keynote Speaker.

Currently, the NAFTC is in the process of selecting a location for the 2017 kickoff event. If your organization is interested in hosting the kickoff event, contact Judy Moore , NAFTC Assistant Director – Communication and Outreach.

The NAFTC plans to announce the kickoff event location early next year.