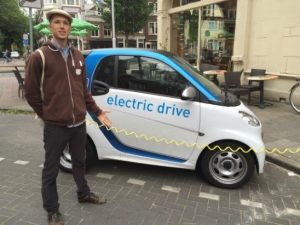 Electric Smart Cars in the USA

In the coming years, those cute Smart cars you see will increasingly be electric vehicles. Daimler—Smart’s parent company—announced that it will be moving away from internal combustion engine vehicles in the U.S. and Canada and transitioning to all-electric vehicles instead.

“To be more specific, the company is now planning to cease the sale of Smart-branded cars with gasoline engines in the U.S. and Canada by the time that the 2017 model reaches the end of its sales life (this autumn),” writes James Ayers. “All sales in those two countries thereafter will be all-electric Smart cars only.”

“The news shouldn’t be too surprising for those reading this,” Ayers continues, “as the Smart brand (and super compacts in general) have always faced an uphill battle in the U.S., and the all-electric version better fulfills the market that is there (urban people wanting to limit their greenhouse gas emissions and/or fuel costs).”

Hyundai announced that hybrid and all-electric versions of its new Ioniq compact sedan will be available in the U.S. soon. Marketing for the vehicles will begin in March with the vehicles expected to go on sale in September 2017.

“Our focus was on developing a great compact car that happens to be electrified,” says Mike O’Brien, vice president of product planning for Hyundai Motor America in a WardsAuto article. “There were around 1.1 million buyers who shopped for an EV last year, but because of cost or maintenance or durability—or that they felt the car was too underpowered—they didn’t buy one. We are offering a no-excuse electrified vehicle that measures up to compact vehicles in the segment.”

Hyundai plans to introduce several new green vehicle offerings in the coming years. By 2020, O’Brien says Hyundai will have five hybrids, four plug-in hybrids, four all-electric, and one fuel-cell vehicle on the market.

Beginning with the 2020 production models, Volkswagen will be introducing a new design aesthetic. VW’s modern design will be featured in the automaker’s first car in its new family of battery-electric vehicles.

The automaker’s head of design, Klaus Bischoff, says in an Automotive News article that using battery packs allows VW to change the shape of its upcoming cars. The cars will have shorter hoods, longer wheelbases, short overhangs, larger passenger compartments, more-raked windshields, and be taller due to the power cells mounted on the bottom of the cars.

Range is another aspect that VW is looking to improve upon with its new designs. By using a smaller hood, the automaker can use a windshield that is inclined at a steeper angle for better fluid dynamics. “To gain the travel distance – range is essential – we need to have outstanding drag coefficients, and this will also influence the shape of the cars quite a bit,” Bischoff said.

Beginning this fall, the University of California Irvine will become the first college campus in the U.S. to switch its entire bus fleet to zero emission vehicles. To accomplish this, the university is purchasing 20 buses from BYD (Build Your Dreams), made at their facility in nearby Lancaster. The new buses will join a hydrogen fuel cell bus already in operation.

UCI students approved an additional $40 per-quarter-per-student fee to cover the bus purchase and startup costs. The fleet, known on campus as the Anteater Express shuttle service, is free for students to ride.

The electric buses are part of the University of California system’s pledge to emit net-zero carbon greenhouse gases from buildings and vehicles by 2025.