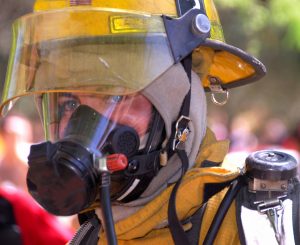 AFVs are just as safe as conventional vehicles, but they are different. Consequently, incidents involving alternative fuel vehicles require specialized procedures from first responders. This month’s case study is based on an incident involving a garbage truck with a natural gas fuel system and is being provided to show the need for first responders to be properly trained when dealing with these incidents.

In January 2015, a garbage truck running on natural gas had an explosion after a trash fire in the truck caused the carbon fiber cylinders holding the fuel to burst. The blast , in Indianapolis, IN, threw the cylinders as much as a quarter-mile and damaged five nearby businesses.


The driver, after picking up trash from a hardware store, noticed a fire in the back of his vehicle and called the fire department. Although it’s protocol for the driver to drop the trash load during a fire, reportedly the driver was worried about nearby power lines and was unable to follow standard operating procedures.

After the fire department arrived, the CNG cylinders began to rupture, and it took an hour to quell the blaze. One firefighter was hit in the head by debris but suffered only minor injuries.

Indianapolis fire fighters examine what remains of a fuel cylinder from a natural gas-powered garbage truck that caught fire and exploded . Photo courtesty of www.theindychannel.com .

Fires associated with natural gas-powered vehicles are less frequent than with conventionally-powered vehicles. According to a 2008 Clean Vehicle Education Foundation survey based on more than 8,300 natural gas fleet vehicles that traveled over 175 million miles:

· The NGV injury rate was 37% lower when compared to gasoline fleet vehicles;

· There were no fatalities compared with 1.28 deaths per 100 million miles for gasoline fleet vehicles;

· Vehicles were only involved in seven fire incidents, only one of which was directly attributable to failure of the natural gas fuel system.

The National Alternative Fuels Training Consortium recommends the following steps for fire fighters when responding to a natural gas-related incident.

· Be sure to identify whether the vehicle is powered by CNG, LNG, or propane.

· Approach the vehicle with caution and only with the appropriate training.

· Look, smell, listen, feel and/or use sensors to detect leaking fuel or a fire.

· If no fire or leak is detected, isolate the fuel system.

For a vehicle fire:

· If the vehicle is on fire or a leak is detected, do not approach the vehicle.

· Isolate the fire, if possible.

· Be aware that, if the flame is extinguished without stopping fuel flow, the fire may re-ignite.

In the case of fuel spills or leaks:

· Eliminate all ignition sources and use water spray to reduce vapors or divert vapor cloud drift.

If extrication is necessary:

· Be sure there are no leaks or vapors that could ignite.

· Know cribbing points and cut zones before cutting into a vehicle.

Just because these type of events are rare doesn’t mean first responders shouldn’t be prepared. Training is key so that fire fighters and other first responders know exactly what to do on the scene.