Electricity as a Vehicle Fuel 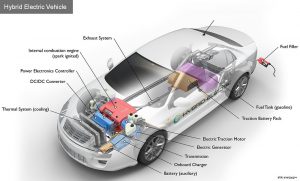 Electricity as a Vehicle Fuel

This article is the sixth in a series examining alternative fuel production and source materials. Previously we looked at biodiesel, natural gas, propane, ethanol, and hydrogen. This month’s article is the last in this series, and covers electricity as a vehicle fuel .

Another category of vehicle sometimes referred to as an electric drive vehicle is the fuel cell electric vehicle (FCEV). The U.S. DOE groups fuel FCEVs into the hydrogen category. Consequently this series of articles covered FCEVs last month in the article on hydrogen as a vehicle fuel .

HEVs are the most common of electric drive vehicles. These vehicles have an internal combustion engine alongside one or more electric motors, and typically run on conventional or alternative fuels. This vehicle is aptly named because it is a hybrid between the two technologies. An HEV uses more than one power system, combining an ICE with an electric motor and one or more power sources, typically a battery pack.

Battery (auxiliary): In an electric drive vehicle, the auxiliary battery provides electricity to start the car before the traction battery is engaged and to power vehicle accessories.

Electric generator: Generates electricity from the rotating wheels while braking, transferring that energy back to the traction battery pack. Some vehicles use motor generators that perform both the drive and regeneration functions.

Exhaust system: Channels the exhaust gases from the engine out through the tailpipe.

Fuel filler: A filler or “nozzle” is used to add fuel to the tank.

Fuel tank (gasoline): Stores gasoline on board the vehicle until it’s needed by the engine.

Internal combustion engine (spark-ignited): In this configuration, fuel is injected into the intake manifold or combustion chamber and combined with air, and the air/fuel mix is ignited by the spark from a spark plug.

Onboard charger: Takes the incoming AC electricity supplied via the charge port and converts it to DC power for charging the traction battery. It regulates battery characteristics such as voltage, current, temperature, and state of charge while charging the pack.

Power electronics controller: This unit manages the flow of electrical energy delivered by the traction battery, controlling the speed of the electric traction motor and the torque it produces.

Traction battery pack: Stores electricity for use by the electric traction motor.

Transmission: Transfers mechanical power from the engine and/or electric traction motor to drive the wheels.

These vehicles may be refueled at conventional fueling stations and may travel any distance, provided there are ample fueling stations along the way. HEVs do not have a plug-in battery instead they charge the onboard battery using regenerative braking and the ICE. Energy from the battery provides extra power during acceleration.

PHEVs are similar to regular HEVs. PHEVs have extra battery capacity and the ability to recharge by plugging in their batteries. When running in EV mode, PHEVs have greater MPGe than HEVs. When out of battery range, PHEVs have similar miles per gallon equivalent and range as HEVs.

Charge port: The charge port allows the vehicle to connect to an external power supply in order to charge the traction battery pack.

Note: The remaining components are the same as within an HEV.

BEVs, or all-electric vehicles, are the most simplistic of electric drive vehicles by design. These vehicles typically consist of little more than batteries and motors in their drivetrains. BEVs receive almost double the MPGe of an HEV, or about three times the MPGe of a conventional vehicle. BEVs can be recharged through charging stations or by being plugged in for 30 minutes to 12 hours, depending on the charging equipment. These vehicles are the least expensive to run of all vehicles currently on the road. However they suffer from limited battery range, as they do not have an internal combustion engine or generator to recharge them or provide energy for motion. Most BEVs can travel a distance between 50 and 200 miles, depending on the vehicle, weight, and driving conditions.

Note: As BEVs are the most simple of electric drive vehicles, all of their components are included in the descriptions of HEVs and PHEVs.