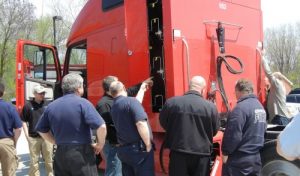 By Jeff Julian and Gary Garrisi

This month’s case study is based on an incident involving a compressed natural gas fuel system and is being provided to show the need for first responders to be properly trained when dealing with these incidents.

On April 3, 2014, residents in Howard, Wisconsin, heard a loud explosion. Arriving at the scene, witnesses found a box truck had been destroyed. The driver was pronounced dead at the scene, and the passenger had been thrown from the vehicle.

The Howard Fire Department arrived to secure the scene and the area was evacuated in case of additional explosions. Brown County Hazmat Teams were called in to assess the threat of a fuel leak and a reconstruction team to document the scene.

“Something in the load of the vehicle shifted and it compromised the compressed natural gas fuel system, consequently there was a detonation of the fuel system that injured one of the people in the vehicle and there was also a fatality,” said Ed Janke, the director of Howard Public Safety, to local news outlets at the time.

“We notified Green Bay Hazmat team to assist us in our investigation,” said Janke. “They found that the vehicle had actually off gassed and we determined the scene was safe.”

The Ace Manufacturing truck was transporting materials between two company facilities on the half-mile long road. During transport the materials slid forward and punctured a compressed natural gas tank stored behind the cab of the truck, causing the tank to explode.

Just over a month after the incident, 23 first responders and representatives from local fire departments and local fleets attended this two-day safety training at the Howard County Fire Department.

“We decided to conduct the class to better educate instructors throughout Wisconsin on how to handle events. We had previous training on hybrid electric vehicles only, and this course introduced instructors to other types of vehicles,” said Christopher Hohol, public safety instructor at Northeast Wisconsin Technical College. “Training is very important to responders because incidents today are not standard. You cannot confirm easily what is and is not a non-conventional vehicle. This training will assist instructors in delivering that message to responders.”

The NAFTC’s First Responder Safety Training prepares first responders to safely and effectively respond to accidents involving a variety of alternative fuel vehicles, including electric drive vehicles and vehicles that run on natural gas, biofuels, ethanol, hydrogen, and propane. Currently there are courses for firefighters, law enforcement, and EMS personnel.