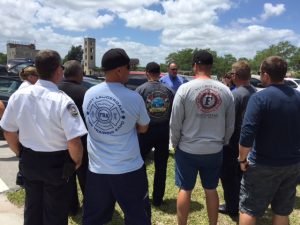 These courses were the final part of a U.S. Department of Energy funded project through the University of Central Florida and Central Florida Clean Cities Coalition. The project was developed to train first responders across Florida to respond to incidents involving alternative fuel and advanced technology vehicles. Four NAFTC Firefighter Alternative Fuel Vehicle Safety Train-the-Trainer Courses were held throughout FL in 2016. Information in NAFTC eNews about the earlier trainings can be found here and here.

The first training was held at the Broward Fire Academy, in Davie, FL, on December 7. The course was hosted by the Southeast Florida Clean Cities Coalition.

This four-county region of Florida is home to approximately six million full-time residents plus thousands of “snowbirds” each year. There are 19,000 plug-in electric vehicles registered in Southeast Florida, as well as growing numbers of public and private fleets using alternative fuels like propane and compressed natural gas.

“Technological advances in alternative fuel vehicles are moving at a rapid pace, and through this opportunity, Southeast Florida’s first responder instructors are learning how to provide the necessary training to stay on top of the learning curve in dealing effectively with safety response in AFV crashes” commented Christine Heshmati, coordinator of the Southeast Florida Clean Cities Coalition.

The second training was held at the Fire Academy of the South, in Jacksonville, FL, on December 9. The course was hosted by the Central Florida Clean Cities Coalition.

“It took a partnership to get the needed AFVs to all of these events. We greatly appreciate all of the partners that made this happen,” commented Colleen Kettles, coordinator of the Central Florida Clean Cities Coalition commented in an article in the Winter Edition of Fuels Fix which discusses the trainings and lists program partners.

The courses were attended by nearly 60 firefighter trainers from fire departments and agencies throughout Florida. They returned home with the knowledge to train their fellow firefighters to safely respond to incidents involving alternative fuel vehicles.