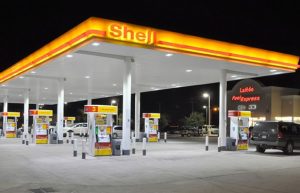 “The push toward renewable, clean energy is strong in Europe,” says Cynthia Shahan in a CleanTechnica story about this development. “One of the benefits of electric cars is the convenient ability to charge at home, or perhaps at your workplace, the grocery store, IKEA, etc. However, installing EV charging stations at gas stations can be helpful to bridge gaps in charging infrastructure for those who are out and about and low on charge.”

According to Shahan, Shell sees the chargers as a business opportunity that will drive customers into the convenience stores typically found with traditional gas stations.

The Nissan Note e-Power, a hybrid that uses a 1.2-liter 3-cylinder engine as a generator to charge the 1.5-kWh battery while an electric motor drives the front wheels, is now being sold in Japan. The vehicle shares several components with the company’s more familiar Leaf model.

According to Tim Healy of hybridcars.com, “Nissan hopes it will serve as a ‘bridge’ for customers as they move from gas-powered vehicles to all-electric vehicles,” and that the shared Leaf components will help reduce the Note e-Power’s costs.

Similar to the Chevrolet Volt, the e-Power system uses an electric motor to drive the wheels and a gas engine to provide charge for the electric motor. The e-Power’s electric motor is 40 kW and makes 109 horsepower. The battery pack is 1.5 kWh. Nissan claims fuel economy of up to 80 mpg.

Tesla founder Elon Musk aroused curiosity this month when he said that the company would be selling its electric vehicles in India.

Responding to a query about when Tesla might launch in India, Musk tweeted “hoping for summer this year.”

“The nation of India is vast market with a growing population and economy, and very few EV offerings in the market,” writes Jon LeSage, “and Tesla could be well positioned to make a splash there. Like China, India has put in place incentives to get automakers to build EVs, and import them, in the country.”

A previously published article reports that Tesla will be building a $9 billion manufacturing plant in Asia sometime soon. Tesla had plans in place to build a factory in China, a person close to the matter told Bloomberg last year. While it hasn’t yet happened, the company had announced it would start the process during 2016.

Earlier in 2016, Indian Prime Minister Narendra Modi and a delegation toured the Tesla’s California corporate campus. As a result of the visit, LeSage reports, Tesla was invited to be a part of India’s strategy to become a renewable energy hub.

A report released by Research and Markets predicts that the global biodiesel market is projected to surpass $41 billion by 2021.

The report notes that companies are investing in expansions of production capacities to increase market share and supply increasing demand for biodiesel.

Korean automaker SsangYong Motor says it may be rolling out three battery electric vehicles by 2020, as reported in Autocar.

The company will compete with the Nissan Qashqai in the small SUV segment with the SIV-2 concept, which has made it to production level. That vehicle’s release has been pushed back to 2019, and it may come out as an electric version of the SsangYong Korando small SUV.

SsangYong has been in the Korean auto market for years and is considered one of the national car companies, Autocar states. However, it is far behind Hyundai and Kia, and U.S. automakers like GM, that have a strong share of the market.