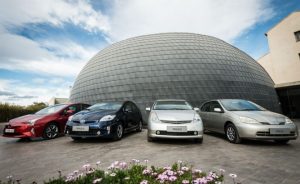 Spurred by the popularity of the Prius, its best-known model, Toyota hybrid sales recently passed the 10 million mark worldwide. The company offers 33 hybrid models in 90 countries, with Japan and North America being the strongest markets. The Prius accounts for 3.9 million of that sales number since it was introduced in 1997.

In a Hybrid Cars article, Takeshi Uchiyamada, chairman of the board of directors at Toyota and the man known as the “father of the Prius,” observed “When we launched Prius, no one even knew what a hybrid was. Those who drove it were called geeks or other names. Today, thanks to those early adopters who gave Prius a chance, hybrids have grown in popularity, and have ridden a wave of success out of the unknown and into the mainstream.”

Toyota projects that hybrid sales will reach 15 million cars by 2020.

Half of Oslo Vehicle Sales are EVs

During January 2017, half of all personal vehicle sales in Oslo, Norway, were fully electric or plug-in hybrid vehicles, reports CleanTechnica.com. Drivers will be able to charge their new vehicles at the more than 100 stations available in the Norwegian capital.

“For Oslo, this part of a long-term effort to get more people to opt for zero-emission vehicles,” said Lan Marie Nguyen Berg, Oslo’s city councilor for environment and transport.” We need to rethink and expand. The City of Oslo will go ahead and make it easier for the city’s growing number of electric vehicles. We will expand the supply of charging garages for EVs only, charging in municipal car parks, fast chargers, and semi-fast chargers.”

A report released by P&S Market Research projects that compressed natural gas (CNG) and liquefied petroleum gas (LPG, also known as propane autogas) markets will grow by more than 10% each year between now and 2022. P&S attributes this growth to increases in population and urbanization, growing demand for vehicles, and efforts to mitigate air pollution.

Europe is the largest CNG and LPG market due to the high price of diesel and stringent emissions standards. The market for vehicles running on these fuels is expected to increase significantly in South America and the Asia-Pacific region.

Beijing’s famously polluted air could be getting a little cleaner. The city recently announced a plan to replace more than 67,000 conventionally fueled taxis with electric models. The project, expected to cost $1.3 billion will be phased in over the next decade.

The efforts in Beijing coincide with the “new energy vehicle” campaign promoted by the national government. Hybridcars.com reports that China is now the largest market for plug-in electric vehicles and, with subsidies available for fleets and manufacturers, sales will likely skyrocket.

Tesla Approved for Sales in Korea

Beginning in May, Tesla will begin selling vehicles in South Korea, after receiving government approval. In addition to sales locations, the company will establish service centers to oversee maintenance and to provide charging stations.

Korea’s domestic hybrid and electric market sold nearly 69,000 vehicles in 2016, an increase of 27,000 over the previous year, according to the Korea Herald.

Commuters in the Belgian cities of Charleroi and Namur will be riding on Volvo 7900 Electric Hybrid buses later this year. Charleroi is the destination for 55 new buses, along with four ABB fast chargers, while Namur will get 35 buses and eight fast-charging stations. Namur has already begun using 11 of these vehicles.

The fast-charging stations are built to the OppCharge open standard so that they can be used by a variety of manufacturers. The vehicles, which run on electric approximately 70% of the time, will reduce emissions by more than 60% compared to conventional diesel.