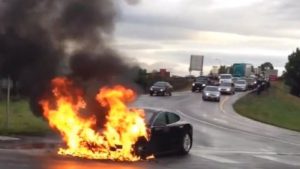 AFVs are just as safe as conventional vehicles, but they are different. Consequently, incidents involving alternative fuel vehicles require specialized procedures from first responders. This month’s case study is based on an incident involving a Tesla Model S that caught fire and is being provided to show the need for first responders to be properly trained when dealing with these incidents.

In 2013, there were 164,000 vehicle fires on U.S. roads, according to the National Fire Protection Association. Most of these incidents did not make the news. But a Tesla Model S fire in Seattle on October 2nd of that year sure did.

The Tesla’s driver said that he struck some metal debris while traveling on state highway 167, as reported by local media. He exited the highway and the car caught fire on the exit ramp.

Tesla representative Liz Jarvis-Shean said, after the company investigated the incident, that the metal object hit one of the vehicle’s battery pack modules. “This was not a spontaneous event,” she was quoted as saying in an October 3, 2013 Seattle Times article. “Every indication we have at this point is that the fire was a result of the collision and the damage sustained through that.”

The liquid-cooled, 85 kilowatt-hour battery in the Model S is mounted below the passenger compartment floor. The fire was contained to the front of the vehicle as designed, Jarvis-Shean said. Nevertheless, the fire posed problems for firefighters.

Arriving within three minutes of receiving the call, firefighters sprayed the car with water and believed they had extinguished the blaze. However, the fire reignited and the crew turned to a dry chemical extinguisher to battle it. Once it was contained, they used a circular saw to cut an access hole through which they applied water to the battery.

Battery fires often reignite because temperatures within the battery remain high. Firefighters have reported “whooshing” or “popping” sounds, followed by off-gassing of white smoke and electrical arcs/sparks that reignited with visible flames. Water will extinguish these fires but it may take considerable time.

The Society of Fire Protection Engineers notes that best practices for dealing with electric vehicle fires are similar to conventional vehicle tactics:

“EDV tactics are generally consistent with current recommendations for ICE tactics,” SFPE reports. “However, first responders must now identify the vehicle prior to immobilizing the vehicle. Other key differences between the two include: the need for copious amounts of water to extinguish an EDV [electric drive vehicle] battery fire, the high voltage electrical hazards associated with EDVs, and the recommendation to store all damaged EDVs at least 50 feet (15 m) from other structures or vehicles post-fire.”

Micheal Smyth, assistant director for training and curriculum development with the National Alternative Fuels Training Consortium stresses the importance of knowing about electric vehicles. “First responders should never cut into or puncture the high-voltage battery pack,” he said. “Doing so poses an extreme risk to firefighters. The best technique is to douse the fire with huge amounts of water. If the vehicle is a total loss, first responders can also let the vehicle burn.”

Of course, using proper personal protective equipment (PPE) is vitally important. For an electric vehicle fire, PPE should include boots, turn out gear, standard structural firefighting gloves, helmets, hoods, and full SCBA. Fire fighters performing suppression tasks should not interact with the VFT or battery packs beyond opening or closing compartment access doors in the front or rear of the VFT.

TomoNews developed a short video of this event, using animation to show how the fire likely started. See the video at: