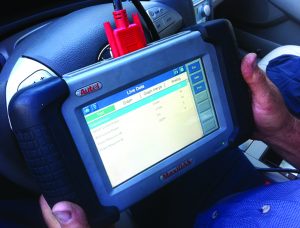 Traditionally, most independent shops have relied on aftermarket scan tools that were designed to work with a variety of Asian, domestic, and/or European vehicles. While this remains true for many independent shops, more and more independent shops are using personal computer based original equipment manufacturer (OEM) scan tools, particularly on late-model vehicles, as access to such tools improves and in some cases cost of the tool has gone down.

Many of today’s vehicles have several dozen modules, each with their own datastream and diagnostic trouble codes (DTCs). Hybrid and electric vehicles can have especially complex self-diagnostic systems. Some aftermarket scan tools manufacturers may be challenged to keep up with the demands of scan data in new vehicles. The technician can expect to work with both OEM and aftermarket scan tools during his or her career.

Three types of scan tools are available to the technician:

As the electric components of a hybrid vehicle’s powertrain influence the vehicle’s operation and could adversely affect emissions in the event of an issue, hybrid powertrain operation typically follows OBD-II standards for the vehicle’s data link connector (DLC), diagnostic trouble codes (DTCs), and communication standards. As with conventional vehicles, most hybrid vehicles produced for model year (MY) 2008 and later also use OBD-II CAN (Controller Area Network), in which CAN is the communication protocol for the powertrain, as well as the vehicle’s DLC.

Although electric vehicles are not required to comply with OBD-II DLC connector standards or use the OBD-II CAN communication protocol, many do. Notable exceptions include some of the smaller EV manufacturers, such as Tesla, which use proprietary scan tools.

Although a generic OBD-II scan tool (or a scan tool that has been set to OBD-II generic mode) will normally be able to access limited scan data from the vehicle’s engine control module (ECM), it will probably be unable to access HV-specific powertrain modules such as the HV battery pack ECU, if equipped. Generic OBD-II scan tools are usually of little to no use to a technician who must diagnose a problem in a hybrid or electric vehicle. 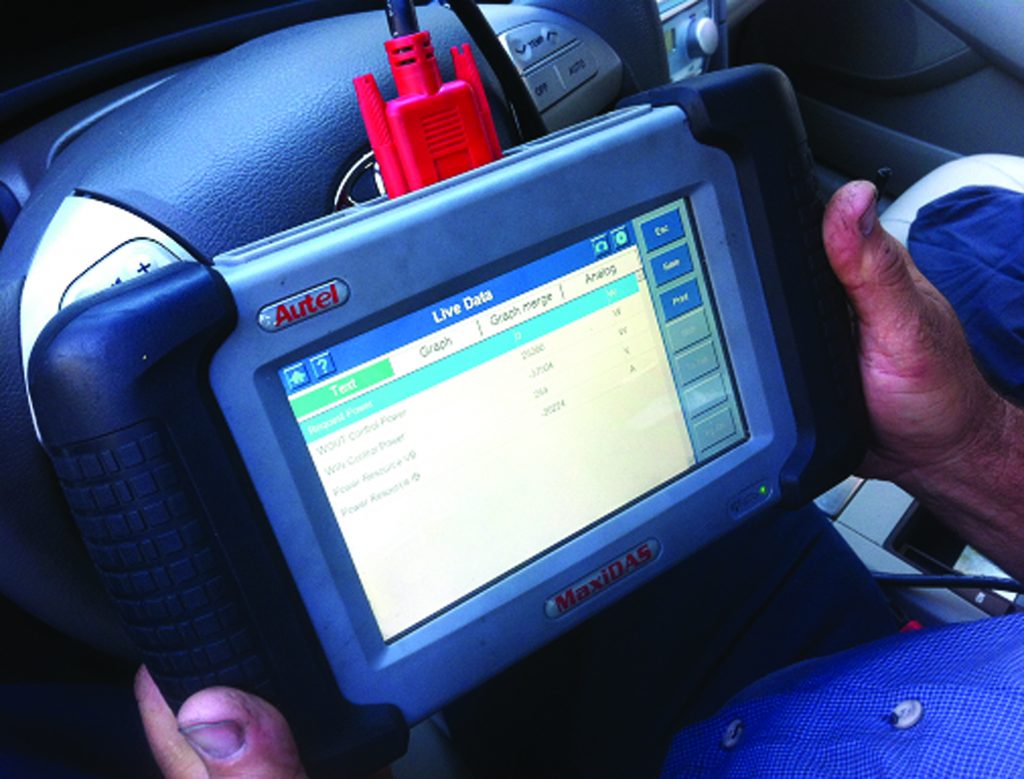 Some aftermarket scan tools may not display all data parameters or may not display data correctly, when connected to hybrid and/or electric vehicles. This scan tool show more than 20,000 amps of charging current flowing into the HB battery pack of a 2007 Toyota Camry hybrid. Actual charging current for this vehicle is no more than 200 amps, and normally much less. Credit: NAFTC.

Some aftermarket scan tools that are enhanced for a particular make and model of a hybrid vehicle may be able to access such modules. The quality of access can vary widely. Future access is also dependent on the level of support that the scan tool manufacturer is willing to provide. The technician should determine the strengths and limitations of a scan tool and become familiar with its operation before using it to diagnose an issue.

Although any scan tool may, at times, have issues accessing and displaying data correctly, OEM scan tools are generally considered to offer the most complete and up-to-date coverage for a given make of vehicle, as compared to other scan tools. As dealerships almost always use OEM scan tools to diagnose the vehicles that they sell, it is in the best interests of each vehicle manufacturer to make that tool as useful and accurate as possible.

Many OEM scan tools (and several aftermarket scan tools) are PC-based. In other words, the scan tool software runs on a Windows-based PC or laptop, rather than a proprietary device. A proprietary vehicle interface module, which connects the PC to the vehicle, serves as the gateway between the technician’s computer and the vehicle. The interface module may connect to a cable that connects to the vehicle’s DLC, or may be incorporated into the cable itself.

Many of the above scan tools have been available for several years or more.

Some older vehicles may not be compatible with current OEM scan tools. For such vehicles, a previous generation of a particular OEM’s scan tool may be required. Vehicle manufacturers can provide information on exact coverage. One source of information on OEM scan tool coverage, as well as OEM service information, is the NASTF website, at www.nastf.org.